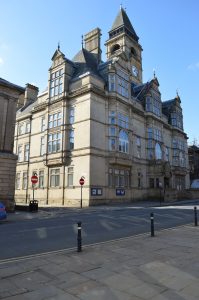 In June 2018, I was approached by The Wakefield Express weekly newspaper to write a column describing my favourite things about my home city of Wakefield. Bearing in mind that the column is a regular feature written by guest writers from around the city, I wanted to say something which, though personal to me, wasn’t just a repeat of what others had written.

Wakefield – a city to be proud of!

I have lived in and around Wakefield all my life. I grew up in Newton Hill and now live just a ten-minute walk from the city centre.

I’ve been interested in architecture and history since I was at school but I have developed that interest considerably in recent years through my involvement with Wakefield Civic Society. When I became president of the Society, I found myself receiving requests from community groups asking for talks about the city, its history and its buildings. These requests were quickly followed by people asking for guided walks around the city centre so that they could see something of the history and architecture I spoke about in my talks. I very quickly had to start doing some research to make sure I had my facts right!

Showing off my city to others has really helped me to understand the story of how the city has evolved. Wakefield may have only had city status for the last 130 years, but our history goes back much further, at least to Anglo-Saxon times. While some of our buildings can trace their origins back to the late middle ages, we have a wealth of Georgian and Victorian architecture right on our doorsteps – yet people don’t always recognise or appreciate the diversity of our architectural heritage until someone points it out to them.

In this article, I realise that I’m supposed to say what my favourite places in the city are, but that’s really difficult for me – I have so many favourites! However, one street I have grown increasingly fond of is Wood Street. Not only is it the heart of the city’s civic area but it formed the subject for a research project I undertook on behalf of the Society when we joined with Wakefield Council, Wakefield Historical Society and Leeds Beckett University recently to uncover the history of the street. This led to me writing my first book – Wood Street: The Heart of Wakefield – which the Society published last year. I now have a much deeper understanding of the history of the street and surrounding area – but I’m still learning! As I lead guided walks around Wood Street, people will sometimes recount their memories of the street and its buildings.

One of the surprising things about Wood Street is that it is only just over 200 years old, having first been laid in out in 1806 by the Reverend William Wood, who was the second vicar at St John’s Church and a bit of a property developer on the side!

Much as I love my home city, I’m not blind to its problems. Yes, there are empty shops and offices and this is very true of Wood Street, but I remain optimistic that things will change. What I’d love to see happen is for a new hotel and a new art gallery opening in Wood Street. I think the former police station and court house would lend themselves rather well to such uses. Why an art gallery? Well, the Hepworth Wakefield has proved without doubt that there is huge interest in art and it attracts people from all over the country but the focus at the Hepworth is very much on sculpture. I think there is room in Wakefield for an art gallery that concentrates on paintings and having another gallery at the Wood Street end of the city would be one way of enticing people who visit the Hepworth to come and explore the city centre.

Wakefield is changing as we ourselves change. We might be shopping less, but we do seem to be drinking more coffee and eating out more. There are lots of interesting new restaurants and cafés in the Northgate/Wood Street area and even the night life is changing as some of the bars refashion themselves to cater for a more mature and discerning public. 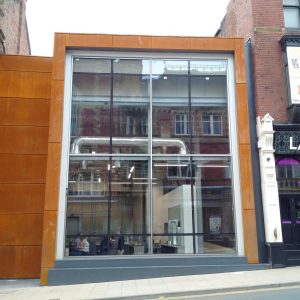 In closing, I must mention that one of my very favourite buildings in the city centre has to be the Theatre Royal. I am really proud that my home city boasts such an attractive (and intimate) Frank Matcham designed Victorian theatre and I’m really excited by the opening of the new Centre for Creativity, an extension built very much in the modern style of the 21st Century.

So that’s it: great architecture, a fascinating history, a developing centre for culture and art, and a burgeoning reputation for dining out. Add in the various festivals and other attractions and there’s no wonder that I still regard Wakefield as my favourite city!

You can email me at the following address:

Kevin Trickett is a freelance speaker, flâneur and writer, based in Wakefield, Yorkshire. All content on this website unless otherwise attributed is © Kevin Trickett